The branchsawing project with Caruna was completed ahead of schedule

Due to the detailed planning, the joint trimming project with network operator Caruna Oy was completed without problems and ahead of schedule.
Sawing in a densely populated area has its challenges, and we got once again a possibility to utilize our experience of 23000 trimming hours when we sawed in the middle of the second largest city of Finland, Espoo.

The joint pruning project with Caruna showed how strong co-operation and detailed planning ensures safe sawing even in an urban environment.

Safety was ensured at the most by four people and who took care that bystanders stayed far enough from the action.  Also, one person was always supervising the landing zone and re-fuelling the copter.
The pre-planning focused on active communications in addition to safety issues.  People living in the area received information by personal letters, SMS and from digital and printed media.

Meticulous planning prevented surprises happening, and co-operation enabled the completion ahead of planned schedule.  Caruna’s original decision to use aerial trimming was based on the facts that project is short and disturbances including electricity cuts are minimized.

In spite of the ambitious timetable, the quality was not compromised. Trimming was done carefully, and no branches were left to hang on top of power lines.  The vegetation under the lines was removed manually.  When trees and vegetation are cleared, the risk of forest fires due to electricity short circuits are decreased.

“We have sawed in similar locations around Europe, but the urban environment always has its communications and security challenges. So successful project needs close co-operation, and also the grid company needs to participate actively and have a genuine desire for development.  Caruna receives our special thanks for this,” tells the Development Director Jan-Erik Luther.

“We ended up in Espoo area to use helicopter pruning because of reliable and trouble-free service. The resident center is a challenging environment due to the large population density and traffic, but with good communication and collaboration, the project went faster than planned. From the feedback, helicopter cutting was also generally considered by customers as a good clearing method and thus a successful choice,” says Maintenance Manager Petteri Palmumaa from Caruna Oy. 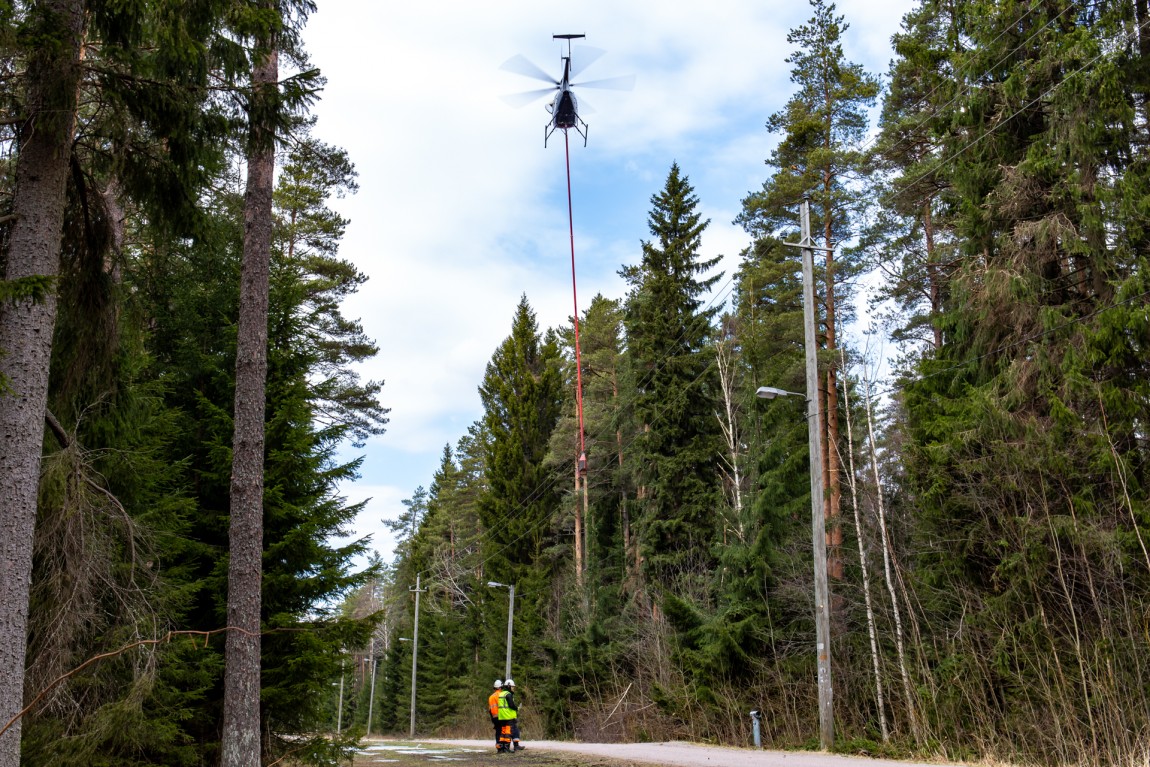 Helicoptersawing close to a pedestrian road

We are specialized in performing demanding
work for the energy sector performed by helicopters.